Disparities in breast cancer have been reported for race/ethnicity and poverty within a country despite adjusting for known confounders and risks factors. These differences are multifactorial and are related to differences not only in tumor biology but also in screening practices, access to care and overall socioeconomic status. There is nothing in the literature about the short-term effects of immigration on the development of breast cancer.  In our recent review of women with breast cancer living in Haiti compared to Haitian women with breast cancer living in Miami who were recent immigrants, we saw lower stage and longer survival in the Miami group.  These differences can be readily explained by improved access to care for the Miami cohort. However, there were significant differences in age and estrogen receptor status between women living in Haiti compared to those living in Miami that could not be accounted for by access to care and remain unexplained. These differences persisted when comparing the two Haitian cohorts with African American and Caucasian women with breast cancer from the SEER data. This raises the question as to whether there are short-term effects of immigration on breast cancer incidence and type. 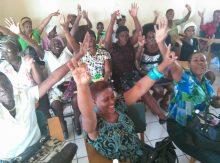