Targeting mitotic functions of TBK1 and Cdk2 to combat caner

It is now well recognized that permanent damage to cellular DNA is a hallmark of human cancer. This genomic instability is thought to generate genetic diversity in tumors that can lead to metastasis and drug resistance.  However, the mechanisms by which genomic instability is initiated during tumor formation are poorly understood and this information will be critical in order to stop ongoing genetic alterations within cancers.

Dr. Chellappan’s laboratory has identified the TBK1 protein as a key regulator of the cellular processes that ensure that genetic damage does not occur during cell division. The Law laboratory has shown that activation of the Cdk2 enzyme promotes genetic damage.  A literature report indicates that TBK1 may control the biochemical activity of Cdk2.  The hypothesis driving this proposal is that TBK1 and Cdk2 are key elements of a regulatory pathway that ensures normal cell division and prevents genetic damage during cell replication.  Drs. Law and Chellappan willcombine their respective resources, knowledge, and expertise to determine the mechanisms by which the TBK1-Cdk2 pathway regulates cell division, and based on this information, will formulate and test therapeutic strategies to block the genomic instability that is a defining feature of cancer. 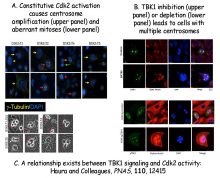 Dr. Chellappan received his Ph.D. in Biochemistry from the Indian Institute of Science, Bangalore, India, and did his post-doctoral training at the Duke University Medical Center. He became an independent faculty member at Columbia University in 1992 and move to the Moffitt Cancer Center in 2001, where is a Senior Member and the Chair of the Department of Tumor Biology. His work focuses on signaling pathways that facilitate the progression and metastasis of cancers, especially in the context of smoking. His laboratory also investigates signaling pathways that regulate self-renewal and vascular mimicry of cancer stem-like cells, with the intention of identifying novel therapeutic agents to eliminate these cells.

Dr. Law received a Ph.D. in biochemistry from Purdue University and obtained postdoctoral training in cancer biology in the Vanderbilt University Medical Center. He began a faculty position at the University of Florida (UF) in 2004 in the Department of Pharmacology & Therapeutics and since that time has published extensively on the roles of Cyclin-dependent kinases (Cdks) in the initiation of breast cancer, induction of genomic instability by Cdk2 activation, and the identification of a novel class of Cdk2 inhibitors.